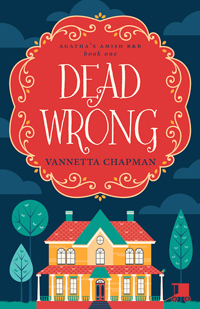 When Agatha Lapp’s brother and sister-in-law are tragically killed in a buggy accident, Agatha relocates to the new Amish community in Hunt Texas, nestled in the Texas Hill Country. She’s there to make a success of her brother’s dream–an Amish B&B. Agatha is friendly, efficient, and capable. She’s also a fifty-five year old widow who has learned to be independent. When she discovers Russell Dixon’s lifeless body in Cabin 3, she runs next door where retired detective Tony Vargas lives.

The police determine that her guest died of natural causes, but as Agatha and Tony put together the events of the previous two days they become convinced that the police are Dead Wrong. Dead Wrong is a story of discovering new friendships and embracing a different path in the midst of tragedy. Above all else, it’s a story of God’s grace and provision.