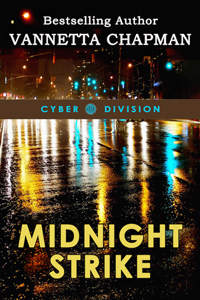 Who would want to bring about the collapse of the nation’s ninth largest city? And if they succeed, what is their next target?

Nora Brooks has a new partner–Randall Goodwin is young, confident, and a computer genius. He thinks he wants out from behind the desk at the agency’s headquarters, and so he joins Nora in pursuing cyber terrorists. When Dallas, Texas is hit with a coordinated attack, Nora and Randall board a C-20 Gulfstream Naval Jet bound for the Lone Star state. At risk are four different sectors–transportation, utilities, medical, and infrastructure. If allowed to proceed, the toll on the 1.3 million population will be devastating. Nora and Randall arrive at the Dallas command center to discover they’re facing a coordinated attack from four different cyber terrorists, and at least one of them is on the inside.

Midnight Strike is book 2 in Vannetta Chapman’s Cyber Terror series. The journey begins with Fading Into the Night, a novella set in the Amish community of Shipshewana which first appeared in the Summer of Suspense Anthology.