Fading Into the Night 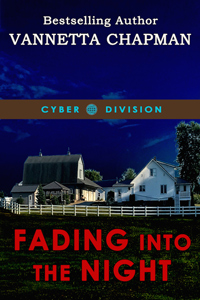 When a cyber terrorist targets the Amish town of Shipshewana, an Amish farmer and a seasoned agent join forces to stop the attack.

How do you defend yourself against an attack you can’t see?

Nora Brooks has been sent to the small town of Shipshewana to stop a cyber-attack that could kill hundreds. She doesn’t realize that she’ll need an Amish farmer to do so. Ben Lapp is walking around the corner of his barn when he comes face to face with a woman dressed in black, bleeding from a wound on her right arm, and aiming a gun at him. When he learns why she’s there, he wants to do more than stay out of her way. He wants to help her stop this threat to the community and the people that he loves. But the man who is threatening Ben’s community has faded into the night, and it’s going to take every bit of cunning and instinct these two possess to find and stop him.

This story first appeared in the Summer of Suspense Anthology.